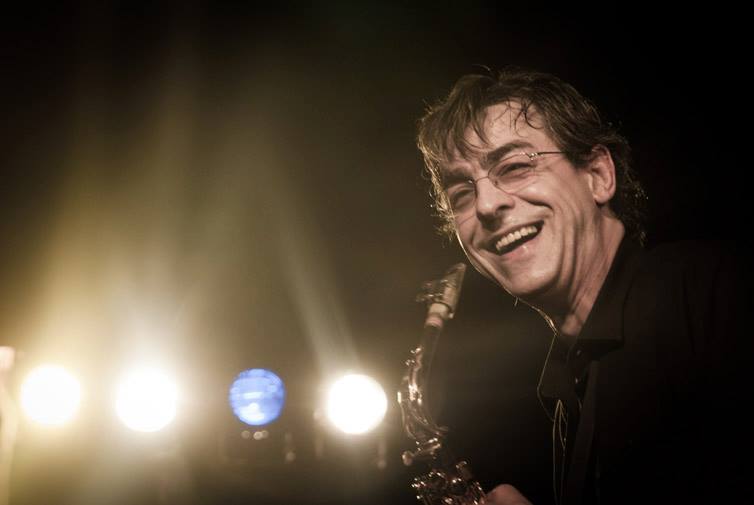 Alessandro Bertozzi was born in Busseto, Italy, and currently lives in Roncole Verdi, near Parma. He became interested in music at a very early age and was pushed by a local musical director to develop his love of it. He began by studying the clarinet and saxophone and then enrolled in the Scuola di Liuteria in Cremona (famous for its Stradivarius violins), where he learned to construct stringed instruments.
In the meantime, Bertozzi started playing in local bands and orchestras, showing more and more interest in performance and composition. This led to various collaborations with local studios, recording his music and that of others, finding his own distinct and unique voice. He also gained valuable experience on the road, touring internationally.
Playing in various groups and gigging around Europe convinced him to abandon his interest in making musical instruments. He decided once and for all to make music instead, focusing on the study of different instruments and melodic composition in particular. To this day, besides playing the alto sax (as well as the soprano and tenor), he also manages the arrangements of his musical projects and their production.

Bertozzi’s first CD as solo artist and composer was Big City Dreamer, recorded in Italy in 1998 with the collaboration of exceptional Italian talent, including Alberto Tafuri. A mixture of Jazz, Fusion and catchy melodies, it attracted the attention of critics and listeners.
In his quest for finding new sounds and gaining more experience, Bertozzi decided to study Latin-American music, taking lessons from Paquito D’Rivera.

He left for New York in 2003 to work on his second solo CD project, Talkin’ Back. It involved collaboration with some very important American musicians, including Bob James and Hiram Bullock. The CD offered two songs sung by Paola Folli and another produced in Los Angeles with Joe Vanelli (Eyes). Talkin’ Back carried on from where Big City Dreamer had left off, creating an aggressive Funky-Fusion rhythm section accentuated by inspired melodies and evoking sensuous atmospheres.
The collaboration with Hiram Bullock led to the “Talkin’ Back Tour”, a series of live concerts performed from 2004 to 2007 that eventually took Bertozzi and Bullock to the Blue Note in New York City.

During an interview, Bertozzi declared to a journalist, “We are always looking for something new, working openly somewhere between Jazz and Funky. For my next CD, I’d like to give a more defined sound to my compositions, collaborating at the same time with great artists so that each brings his or her contribution to the project.”

In 2009, Bertozzi frinished recording his next CD, Crystals, a culmination of experience and musical talent that went in this direction. Produced by Bertozzi’s good friend and bass player, Lorenzo Poli, so that he could focus more on writing, Bertozzi got together with artists of international acclaim, including John Patitucci, Randy Brecker and Hiram Bullock (who lent his deep, resinous voice to the only sung tune on the CD before dying tragically on 28 July, 2008), in an effort to give his compositions a new and exciting feel. The project includes a horn section and string orchestra, creating a sound that is rich and varied.
A live concert was held in Berlin to announce the release of Crystals during JazzKomm 2010.

Bertozzi is also Artistic Director for his record label, Level49. He plays a Yamaha Custom YAS-855, bothwhile gigging and recording.

This website uses cookies to improve your experience while you navigate through the website. Out of these, the cookies that are categorized as necessary are stored on your browser as they are essential for the working of basic functionalities of the website. We also use third-party cookies that help us analyze and understand how you use this website. These cookies will be stored in your browser only with your consent. You also have the option to opt-out of these cookies. But opting out of some of these cookies may affect your browsing experience.
Necessary Always Enabled
Necessary cookies are absolutely essential for the website to function properly. This category only includes cookies that ensures basic functionalities and security features of the website. These cookies do not store any personal information.
Non-necessary
Any cookies that may not be particularly necessary for the website to function and is used specifically to collect user personal data via analytics, ads, other embedded contents are termed as non-necessary cookies. It is mandatory to procure user consent prior to running these cookies on your website.
SAVE & ACCEPT
Go to Top